The youth are society’s greatest asset. Our treatment of young people is an investment in our own future. This not only rings true in conversations about education and child poverty, but also regarding criminal justice. Nationally in 2019, there were nearly 700,000 youths placed under arrest and 4,100 people under age 18 incarcerated in adult jails and prisons.1 Studies have shown that youth imprisonment correlates to a host of negative consequences both while incarcerated and after incarceration as they eventually attempt to reenter society.

Mississippi is no different, and in some ways is worse in its treatment of incarcerated youth. According to November 2021 data from the Mississippi Department of Corrections (MDOC), 1,181 people currently incarcerated in Mississippi prisons were arrested and detained before age 18 – roughly 1 out of every 14 people incarcerated by MDOC. Out of those incarcerated as juveniles, 68 have been in prison for at least 20 years – collectively costing the state over $1.2 million a year. 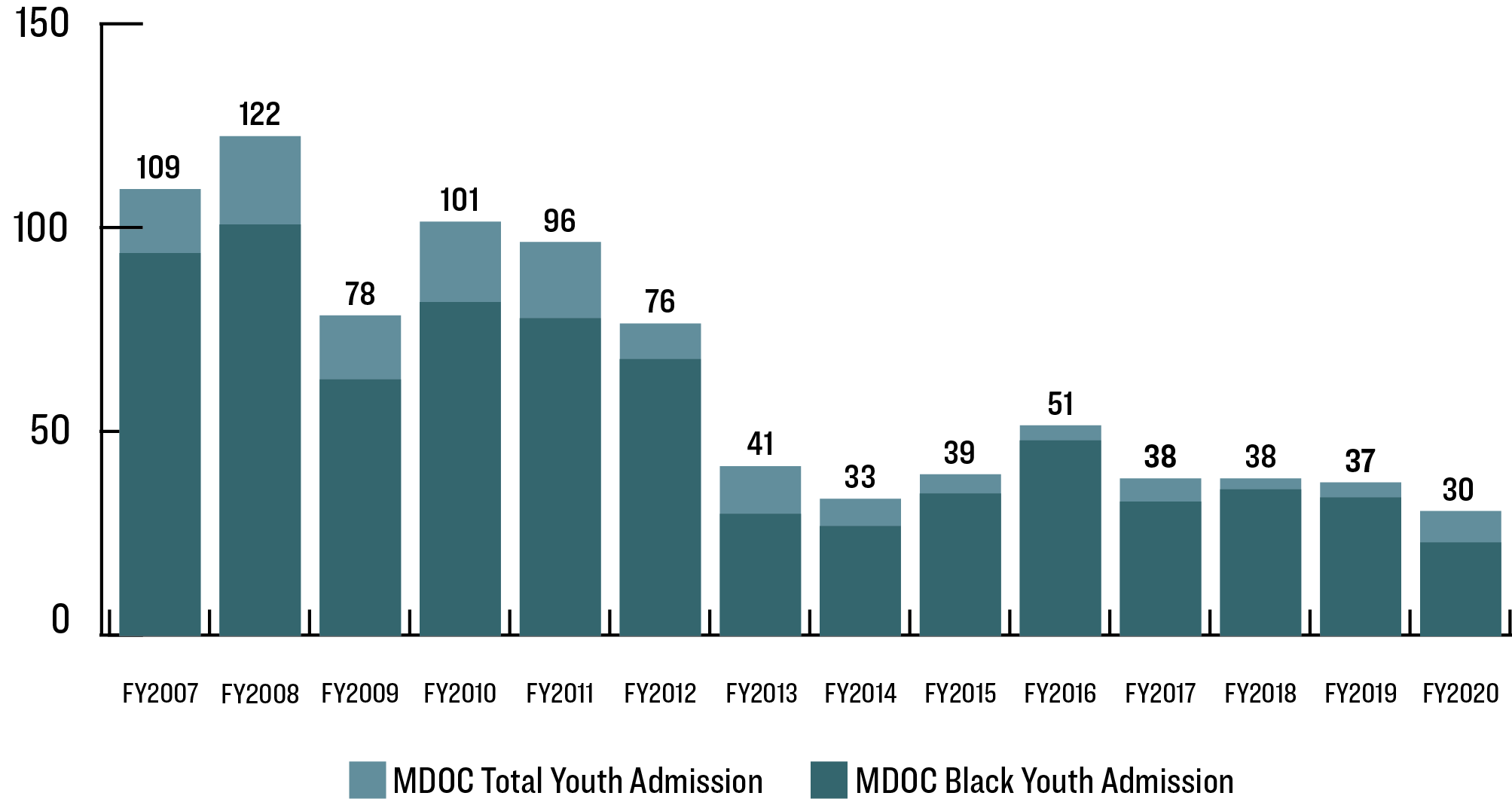 In 2012, the U.S. Supreme Court considered in the case of Miller v. Alabama the question of whether sentencing a 14-year-old to life without parole (LWOP) was unconstitutional, even if convicted for the crime of capital murder.2 The defense asserted that LWOP was a violation of both the Eighth and 14th amendments, on grounds that it was cruel and unusual punishment for a juvenile. The court ruled by a 5-4 majority that while LWOP may be appropriate for adults, such a sentence was an unconstitutionally disproportionate punishment for children.3

Miller took into consideration how the human brain does not fully develop until one’s mid-20s, especially the parts of the brain that control rational decision-making.4 Consequently, youths are much more susceptible to peer pressure, impulsiveness and sensation-seeking than adults, justifying a different approach to accountability that is more appropriate for younger people. Incarcerating youth has been proven to have many consequences, including an increased likelihood of recidivism after release, exacerbation of mental illnesses, and less success with educational achievement and gainful employment.5

Youths locked up in adult prisons are twice as likely to be beaten by prison staff,6 five times more likely to be sexually assaulted,7 and 36 times more likely to attempt suicide8 compared to youths put in more age-appropriate environments. Youths in adult prisons are also at the greatest risk of being held in solitary confinement compared to other age groups.9 Incarcerated youth face these violent circumstances even though 93.7% of all juvenile arrests are for nonviolent offenses.10 Any one of these consequences demonstrate youth incarceration is a barrier to developing citizens who successfully reenter society.

By the Numbers: Mississippi’s incarcerated youth

The average sentence for youth MDOC admissions over the last five fiscal years is 8.6 years, with various kinds of burglary as the most common offense. However, among the 1,181 people incarcerated in MDOC before age 18, there are youths convicted of crimes with much longer sentences.

Juveniles convicted of offenses such as capital murder and assault garnered sentences lasting several decades and often without parole eligibility. In addition to the inappropriateness of juvenile long-term sentencing established by Miller, the state also must account for the financial cost of extended incarceration. At a daily cost of $50.63, the expense of detaining a person in a MDOC facility for one year ($18,480) is more than a year’s in-state tuition at Ole Miss and Mississippi State University combined ($18,044).11 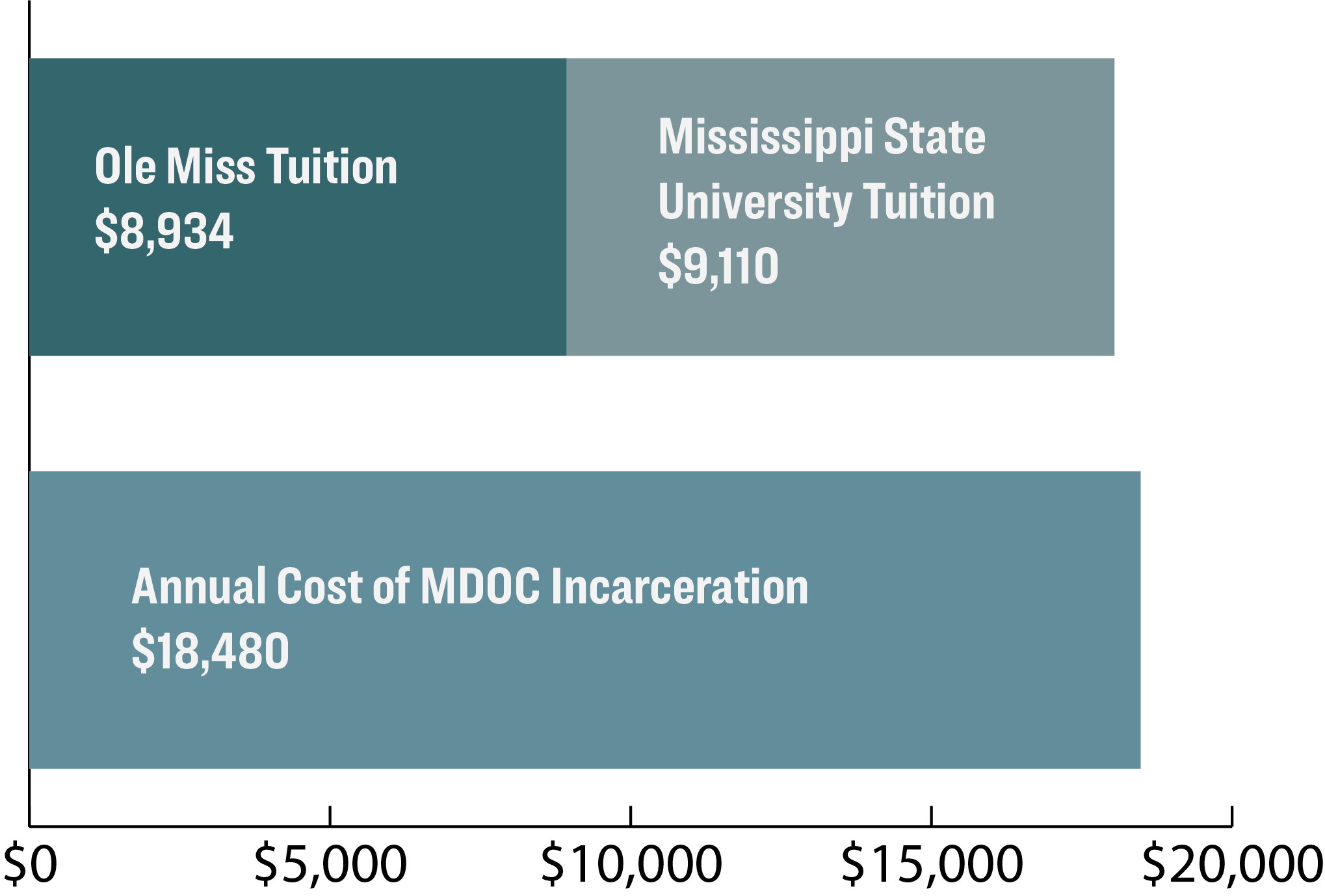 Of the 1,181 people in MDOC facilities arrested as juveniles, 68 have been incarcerated for at least 20 years and have not committed any additional offenses since entering prison.12 On average, these 68 people were 16.1 years old when they were arrested and 17.6 years old when convicted at trial. Now their average age is 43.5 years old, with the oldest now at age 67. These incarcerated persons are well beyond the age when most people typically commit dangerous crimes.13 According to the Bureau of Justice Statistics, people over 40 are the least likely age group to be re-arrested after release.14 Given their age and recidivism statistics, the state could consider releasing these individuals without as much concern about a threat to public safety. 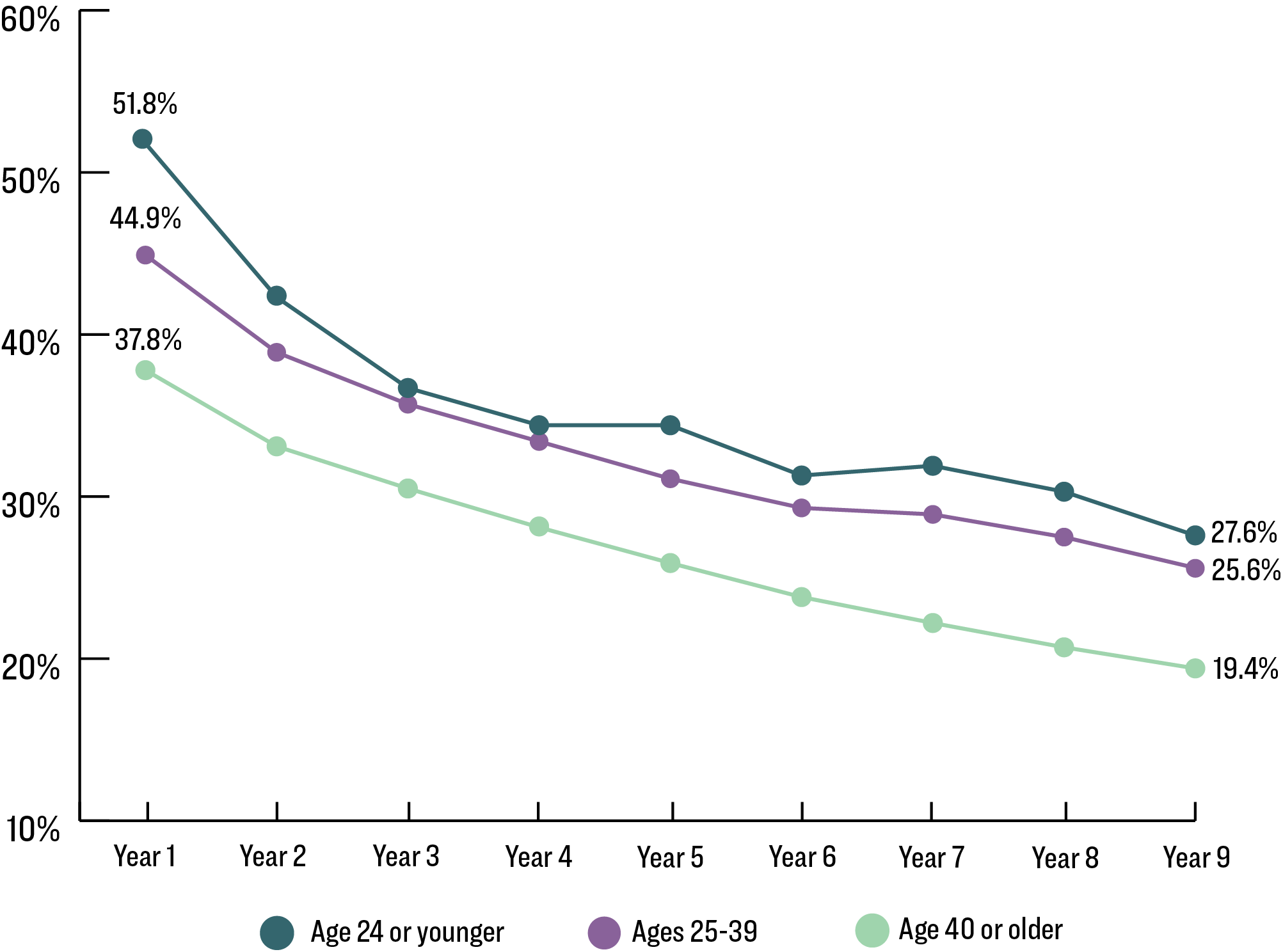 3. The Miller v. Alabama decision was an extension of a prior ruling of Graham v. Florida (2010) which held that life-without-parole sentences for juveniles convicted of nonhomicide offenses were unconstitutional. In 2015, the case of Montgomery v. Louisiana (2015) declared that Miller should be applied retroactively.

4. Johnson, Sara B. et al. “Adolescent Maturity and the Brain: The Promise and Pitfalls of Neuroscience Research in Adolescent Health Policy.” The Journal of Adolescent Health: Official Publication of the Society for Adolescent Medicine vol. 45,3 (2009): 216-21. ncbi.nlm.nih.gov/pmc/articles/PMC2892678/

5. Holman, Barry, and Jason Zeidenburg, Dangers of Detention: The Impact of Incarcerating Youth in Detention and Other Secure Facilities, U.S. Department of Justice, Office of Justice Programs, 2013. ojp.gov/ncjrs/virtual-library/abstracts/dangers-detention-impact-incarcerating-youth-detention-and-other

11. Daily cost of incarceration is as of FY 2020, according to the Mississippi Department of Corrections (peer.ms.gov/Reports/reports/rpt650.pdf). The in-state tuition for Ole Miss is $8,934 for a full-time undergraduate in 2021-22 (finaid.olemiss.edu/cost-of-attendance-2021-2022). The in-state tuition for Mississippi State University’s Starkville campus is $9,110 for a full-time undergraduate in 2021-22 (sfa.msstate.edu/cost/ug).

12. Raw data from Mississippi Department of Corrections, Active Inmates With Crimes Committed When They Were Under the Age of 18: Report Date, Nov. 12, 2021. Acquired by public records request.

13. Ulmer, Jeffery, and Darryl Steffensmeier, “The age and crime relationship: Social variation, social explanations.” In The Nurture Versus Biosocial Debate in Criminology: On the Origins of Criminal Behavior and Criminality (pp. 377-396), 2014. us.sagepub.com/sites/default/files/upm-binaries/60294_Chapter_23.pdf